Last night, I asked if anyone could point me back to this fantastic animated factorization visualization. (h/t @calcdave)

Now, I'm kicking myself for not thinking to use this in the first weeks of the school year.  Talk about some Fake World math doing a number on pseudo engagement strategies.

I started the animation at the end of each period and walked out to greet students as they walked in.  Once everyone got settled, I walked back in the room and each time the dots would circle up, I'd yell, "PRIME!"

Kids caught on really quick and started looking for the circled numbers.  In fact, it took many students a while to realize that the applet literally said "prime."

We started out by looking at the patterns and how each number was represented visually. 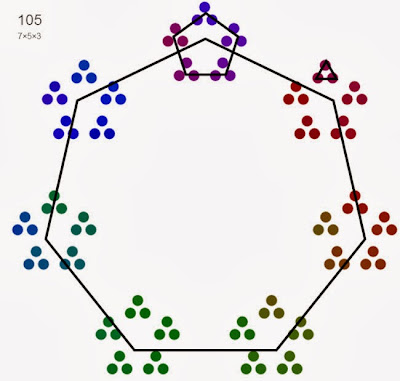 But, next I said, "You know what, I really like triangles. What is the smallest number that will give us a triangle?" 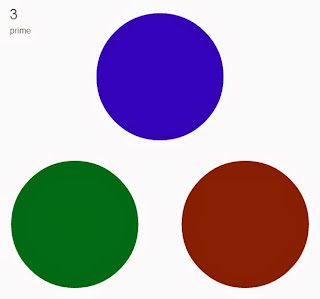 "Alright, what's the next number that will give us nothing but triangles?  Write your guesses on your easel." 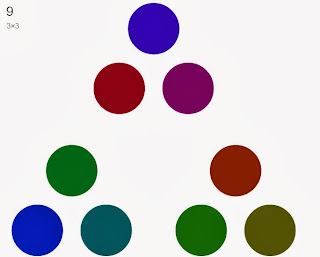 "Alright, what about the next one?"

Still guesses were a little sporadic.  But by the time we got to 81, most students thought they figured out a pattern.  From 243 on, we were at about 100%. 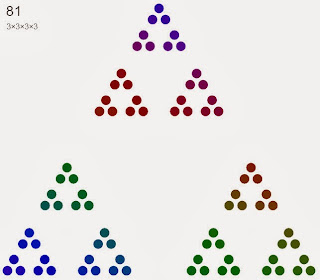 After about 10 minutes of doing this and discussing our results, I put up this slide. 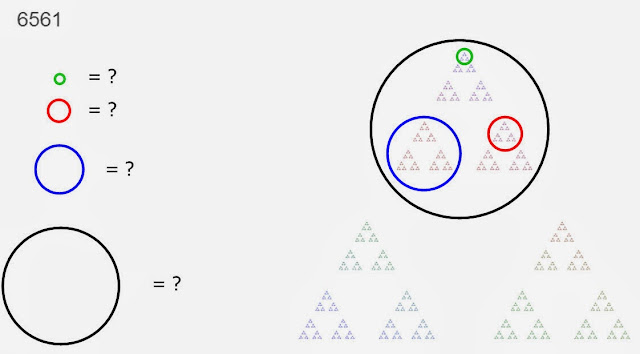 There was a nice discussion on clarifying our question.  Three different student offerings illustrated the idea of First Idea; Best Idea.

Student 1:  At what stage is each triangle?

Student 2:  How many triangles are in the green circle?

Student 3:  How many dots are there in each circle?  *Boom*

Now get to it and be prepared to justify your answer.

"Alright, so let's press on this idea a little."

I know what question I want to ask, but I just bit my tongue until a student speaks up.

"How can you be sure that there are 9 dots in the green circle?"  *There it is*

Here's where it gets good.

From across the room, I hear, "It looks like there are 9 dots in the green circle, but we have to look past that."

"Yeah, we can't trust the picture because the dots are too small.  We know there are 6,561 dots on the whole page and there are three black circles of dots.  We have to start there."

So, Dave, keep this link handy, I'm sure I'll be asking for it again next year.

Ahh this is very clever, I love the idea, and the kids seemed to love it too.

Love it. Got them thinking!

Superb article shared here, I appreciated your work and whole collection regarding it. I think printable math sheets are very beneficial approach for kids,this one of the best platform for learning. your blog contain helpful article to learn Math. I would like to share a complete Math website which is useful to Learn Math Fast free of cost. My kids are also using this website.