Put Some Pants On! 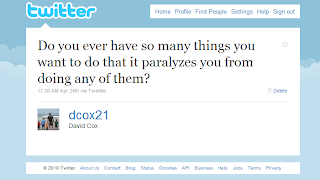 I feel like this quite often.  And I received a tweet from @mrhodotnet with this TED talk by Barry Schwartz on the Paradox of Choice.    There are a couple of references in this talk that will keep me from showing it in its entirety to my classes, but there was one story that really struck me.  One that I had to share with my classes.

Schwartz talks about a time when he has to buy a pair of jeans.  The last time he had done this was when there was one type of jeans that fit horribly until they had been washed a few dozen times (anyone remember Levi's 501's?).  When asked what kind of jeans he wanted this time, he replies, "I want the kind that used to be the only kind."  The clerk being clueless as to what this meant proceeds to show him his options.  After about an hour of trying things on, Schwartz settles on the most comfortable pair of jeans he had ever worn.

But here's the kicker--he says he did better but felt worse.  He had purchased the most comfortable pair of jeans he has ever owned yet felt worse about the experience.  Why?  Because maybe he left the best jeans in the store.

I think our students experience daily.

What step comes first?
"I dunno."

What is the rate of change in this equation?
"I dunno."

I'm convinced that these I dunno's are a result of our student being afraid of leaving the best answer unspoken and find it safer to stay neutral.

To which I say:

Quit standing there in you underwear and put some pants on.  Don't worry about finding the best pair.  Pick one.  Don't worry, they'll break in.

I think I'll get a little mileage out of this metaphor.
Posted by David Cox at 12:43 PM

I'm sure other courses get this, but I bet this reasoning is somewhat unique to math. Students have been trained to think that there is "one and only one answer" for every math question. So, they are scared to say anything that is not absolutely correct.

In my calculus classes, they get mad at me because they will ask something like "Is this method right?" and I won't say "yes" or "no." I usually say, "kind of..." or "almost..." and then try to explain that their reasoning has good parts to it, but they've chosen the wrong method or forgotten a little piece. They don't like it when I won't just tell them definitively that they are right or wrong.

Anyhow, as a person who is wedding planning now, I am totally stuck in paradoxes of choice all the time. "What kind of cake do you want?" Geez...I dunno, what are my choices? "Lemon, strawberry, vanilla, chocolate, chocolate chip, etc etc etc And then there's fillings: caramel, chocolate ganache, lemon curd, strawberries fresh, strawberry icing, raspberry, etc etc etc." Um...I just think cake would be good. I don't know about all that. =P

The thing that I'm trying to focus on with my students right now is being comfortable with being wrong on the first try. Any time we try something new, it's going to trip us up a little. Get comfortable with that, learn from your mistakes and move on.

I need to focus on that as well. Almost annually, my calculus kids tell me by the end of the year that they felt intimidated by me all year. When I ask why, they say, "Because you're so smart!" So, I think that may sometimes (often) translate into their being reluctant to either ask questions or answer incorrectly when asked during the year.

What sort of things are you doing to work on it? Just giving more opportunities to be wrong? More encouragement for the effort? Be wrong yourself in front of them?

I love it-- Barry Schwartz's book is one of my favorites, especially because I'm painfully indecisive myself, and I think both your analysis of the problem and your metaphor are right on.

I've seen teachers effectively build "comfort with being wrong" by explicitly praising effort in a meaningful way. Rather than "thanks for trying," it's "I appreciate you showing courage because your response was reasonable in x and y ways" and "Who is willing to be brave, be bold, and maybe even be wrong?" These teachers build student confidence in the value of risk-taking.

You know, Dave, it's funny how many of my 7th graders really struggle with the fact that I answer very few questions directly. By the time they are 8th graders, they come to expect it. I try to model risk taking as often as I can. I'm not afraid to try new things, recognize those that don't work, scrap 'em and try again. Sometimes, I have to say, "I don't know." Sometimes I have to let a kid work through a problem in a way that seems way off at first, but then let them know how awesome they are by deciding to take the long way home.

Grace,
I'm finding that many of the advanced kids actually are less willing to take risks than many of the kids in regular classes. This safety zone is definitely something that I've been working to establish. It takes time, but it's well worth it.