Sometimes you just have to cut the kids loose and see what they come up with.  The year's winding down and I have kids reassessing (today's the last day) like crazy.  But some kids are proficient on all of our skills so I gave them a short GeoGebra lab on Drawing vs. Construction.  A student came over and showed me this: 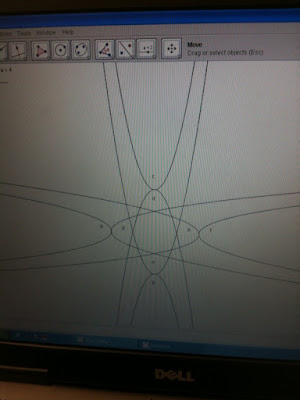 The little boogers were playing around with sliders, defined 'a' as a variable, plugged in the equation:
y = x2 + a
and proceeded to create any variation of that equation they could find.  Opposite functions, inverse functions, opposite inverses, etc.
They marveled at the symmetry and how the whole picture changed as they adjusted the slider 'a.'
I've had kids each year ask, "How do you make a parabola lie on its side?"
I've always responded with, "I don't know. Let's see what we can figure out."
No one's ever pursued it.
These kids discovered it by "playing."
Posted by David Cox at 2:19 PM

I agree so completely! I did something similar with Geogebra: http://larkolicio.us/blog/?p=50

Their play can be structured, even, but I personally want to try to give them more play time next year!