Last year, my kids blew me away with this.  This year, I was a little more prepared for what we might be able to do with projectile motion.  We spent quite a bit of time on vertical motion as part of our standard curriculum, but once we finished with our required standards, we turned our focus towards trig ratios and applying them to motion problems.  I built a few applets using GeoGebra to help my students visualize the motion and it sparked an end of year project that these kids are really proud of. 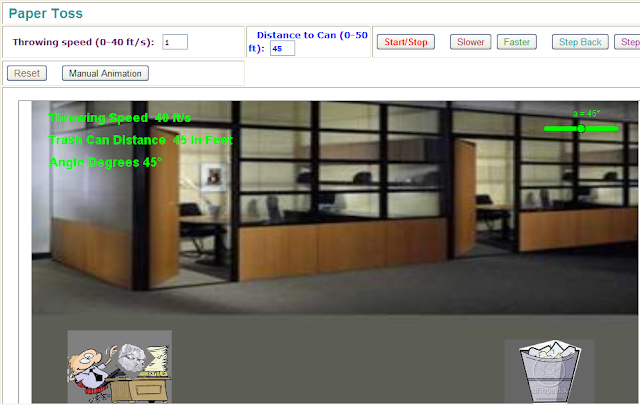 These kids were the first to figure out how to model the projectile.  They used the rest of their time trying to dial in the effects.  We couldn't figure out how to make the backgrounds of pictures transparent, so they spent a bunch of time defining polygons to cover the white areas.  The definitions were really tricky because they had to be defined in terms of the point that was being projected otherwise the image would move but the polygon would remain static.
Check their applet here.
David, Jett and Sartaj 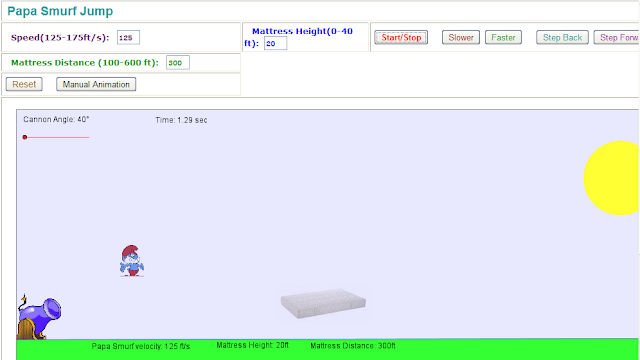 This group really spent some time dialing in their applet.  In my opinion, it's probably the most aesthetically pleasing.
Check their applet here.
Sierra, Brandon H. and Brandon J. 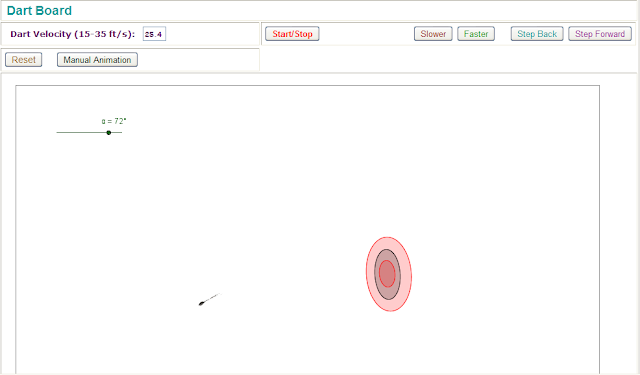 The tricky part of this applet was in defining the condition to display the "Bullseye!" text.  Since the center of the board is an ellipse (to establish a perspective) these students had to define four points to represent the vertical and horizontal extremes of the ellipse.  They then had to determine a set of inequalities which would describe when the point of the dart actually fell within the range of those four points.
Check their applet here.
Marco, Brandon M. and Lazaro 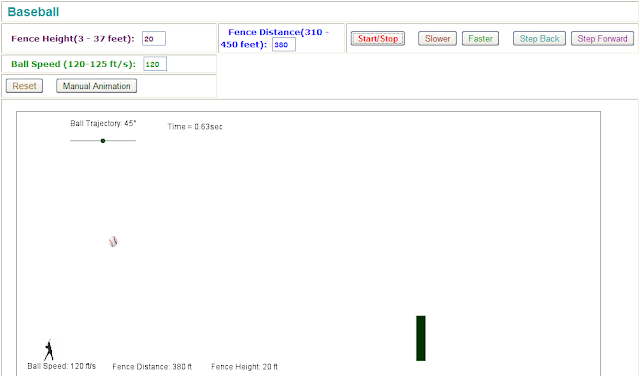 The thing I really like about this applet is how careful they were with their facts.  The fence height can change from 3' (Dodger Stadium left/right field) to 37' (Fenway Park's Green Monster).  They had to define many points in terms of other points in order to get the fence to be dynamic.
Check their applet here.
Fareen, Alec and Breanna 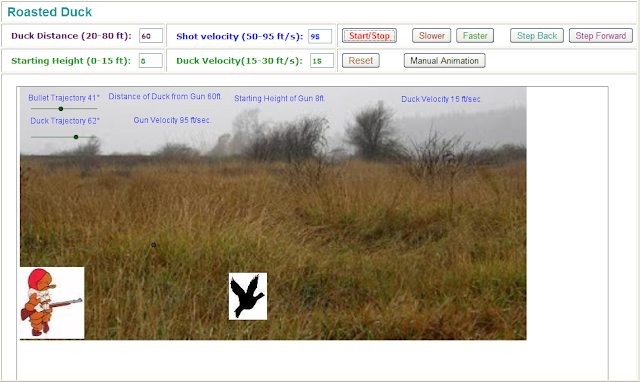 This group took this project by the horns, big time.  They tackled two different motion problems in one.  They have a projectile and the bird flies in a linear path defined by an angular velocity.  They ran into a snag because their scale was so large that the applet ran incredibly slow.  So they spent some time tweaking the axes in order to end up with a really cool applet.
Hit the duck and you'll see their sense of humor--trust me.
Check their applet here.
Jodie, Abraham and Destin 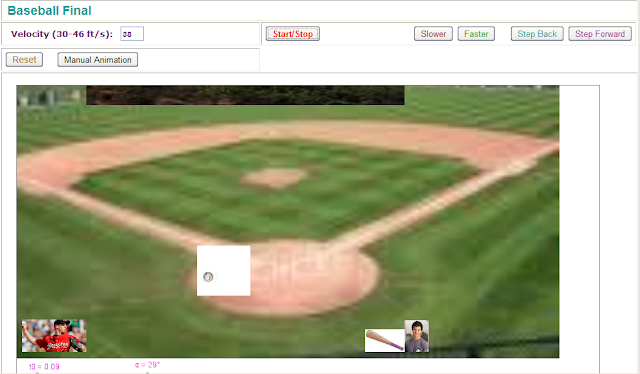 This group had a HUGE vision for this project.  They wanted the pitch to come in as a projectile and then leave the batter with a greater angle and greater velocity.  The timing on this was difficult at best.  They managed to get two projectiles occuring at different times, but had to adjust the time slider to do so.  There were times that this one stumped me.  I really appreciated the challenge they took on.
Check their applet here.
Creston, Mackay, Jared and Alex 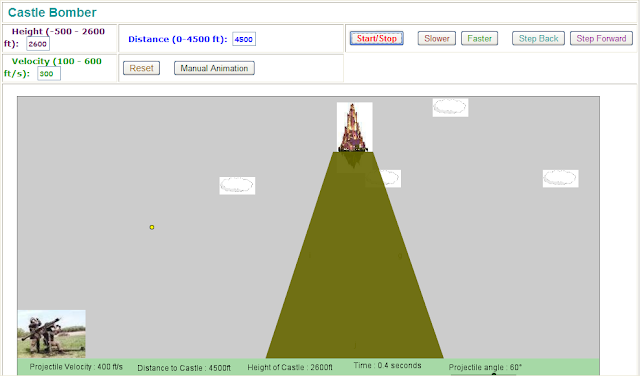 Let's blow up a castle.  What else can you say?  This group really paid attention to detail.  Heck, they even made the clouds move.  Hit the castle and get a mushroom cloud.  What's not to like about that?!
Check their applet here.
Frankie, Alex and Dil 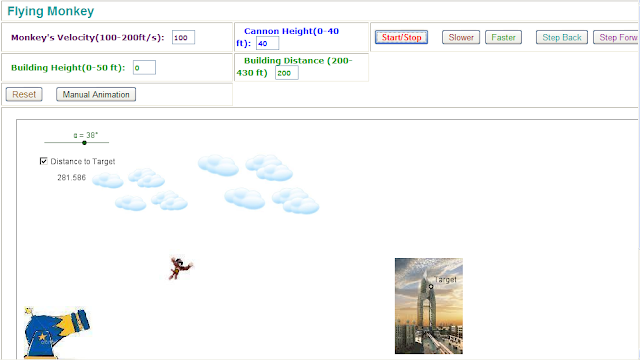 If you knew these guys, you'd see how appropriate a flying monkey is to their applet.  Again, with the details.  Determining the condition to show the final image took some time.  How close does the monkey have to get to the target in order for the launch to be a success?  They mulled it over and drew some strong conclusions.
Check their applet here.
My Role
I asked a lot of questions.  Direct instruction was necessary on things specific to GeoGebra like the coordinates of point B can be understood as (x(B),y(B)) but nearly all of the manipulation of the equations was done by them.  If a group got stuck on how to make the animation end, the standard line of questioning would go something like:
"What do you want the applet to look like when the animation ends?"
"In order to get that result are we more interested in the height of your projectile or the distance?"
"How can we describe the height of a projectile?" or "How can we describe the distance it's travelled?"
Once they were able determine which model they needed to use (vertical motion or linear motion), we'd set up the equation.  A lot of them looked something like:
h = -16t2 + v sin(α) t + s        or           d = v cos(α) t
and they'd play with it until they solved for t.  Sometimes we'd have to think of the velocity in terms of something times t and go back to the original equations h = -16t2 + vt + s or D = rt in order for them to realize that v sin(α) and v cos(α) are just rates.
I don't think I've had more fun over a two week period in the classroom. Ever.
The best part was when the groups would finally export their applet to .html and then we'd go back to my desk where I showed them how to replace the current code with the animation code.  The looks on their faces when they saw something they had created actually do what it was supposed to do was priceless.
Yeah, we'll prolly do something like this again next year.
Tell 'em what you think in the comments.
(Note: I had planned on having students write their reflections and link to their projects on our class blog. However, due to a time crunch at the end, I've posted them all here. They'll be checking this post for your feedback.)
Posted by David Cox at 10:19 AM

I'm bookmarking this, so I can try to do this with my college students. I have to get better at Geogebra first.

Amazing projects. I love how personalized that they are and creative. Curious as to what grade these students are?

These kids are in 8th grade. They really put a lot if themselves into these projects.

Congratulations to everyone. These are fantastic! I'm also most impressed with the creativity. All of the applets are SO different (ok, there are 2 baseball ones, but it is the greatest game in the world). With this applet work as a foundation, before we know it you guys will all be creating games like this and this.

Oh don't lie, Mr.Cox. You loved Alec's, Breanna's, and my applet ;) An yes, our humor does show in our applet. Our applet is not only math, but it truly reflects our sick humored, cynical selves!

Hi David. These are amazing applets. You may want to submit them in the next Mathematics and Multimedia blog carnival.