I Love Me Some ExamView

I spent the last two days on school business building a set of common formative assessments in ExamView that are aligned to my department's skills list for our algebra and pre-algebra classes. Many of the questions are dynamic which means that for any given question type, multiple versions of the question can be created by the click of a button. As I was looking through the question banks, I realized that there were some skills that didn't have questions that fit what we will be trying to assess. Solution? Build it yourself.

The process is a bit tedious at first, but I was able to use previously made questions to figure out how to build a simple question regarding slope.
Step 1: Define your algorithms. 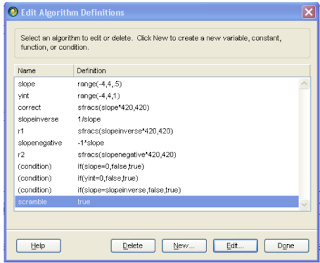 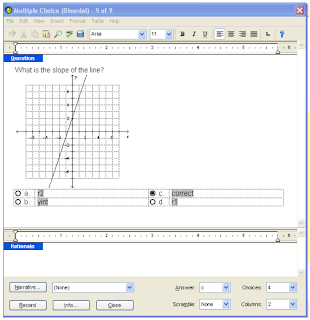 Yeah, gotta say I love this feature. Finding questions with good distractors is tough at best. But if you decide on an algorithm based on common misconceptions, you're good to go. In this problem, I decided the common misconceptions for students calculating slope based on a graph were:
Of course, there may be some discussion on what the best misconceptions would be, but for the sake of practicing, those are what I went with.
Step 4: Decide how many of these type of question you want in your assessment.

I'm glad that I don't have to build all of these from scratch, but I like the fact that filling in the holes isn't too tough.

My introduction to quadratics has evolved over the years. Recently I settled on having my students do as much graphing as possible and allowing them to make the connections they need to make in regards to the equation of a quadratic and it's resulting graph. I have found that allowing my students to roll their sleeves up and start graphing allows them to become more comfortable with quadratics. This pays dividends when it comes time to solve quadratic equations by factoring, completing the square or by using the quadratic formula.

Intro to Quadratics
This worksheet usually comes after we have exhausted ourselves on linears and introduces the idea that there are other relationships and, no, they don't all form a line. We do this by measuring various circular objects and calculating the area and circumference. We then graph circumference vs. radius and area vs. radius.

Graph the Magic Number
This worksheet is a little less organic, but still results in a quadratic relationship.

Stretch Factor
What happens when we graph change the "a" value? I give students a series of "Silent Board Games" (borrowed from CPM), where students are given incomplete input/output tables and are required to find the patterns to complete them. Once they are completed, they graph the parabolas on the given coordinate plane. The idea is for them to make the connections between the input/output table, the equation and the graph. Usually students are pretty quick at recognizing they can describe what the graph would look like just by observing the equation.

Graph Given the Vertex
In this worksheet, I give students random points on the plane and have them graph a parabola with a stretch factor of 1 or -1. By this time I expect them to have a grasp of the relationship between the points on a parabola and it's vertex. This allows them to see that if they can graph one, they can graph them all.

Vertical Shift/Horizontal Shift
Both of these worksheets are in the same format as the stretch factor worksheet. I have students complete input output tables and graph. By this time, they are looking for relationships between the equation and the visual interpretation of the graph.

GeoGebra Investigation
This is pretty intensive and I probably need to break it up into smaller more manageable labs. I would like to throw that out there for discussion. The main ideas that I wanted my students to explore are:

Find the vertex
This last worksheet has students take different quadratics and use the equation to find the vertex and line of symmetry. From there they will graph using only the vertex and the stretch factor. I then allow them to use GeoGebra to check their answers.

It Was Fun While It Lasted

Sorry, guys, I gave Wordpress a try, but it just isn't working out.  I'm moving.  New address is http://coxmath.blogspot.com.  I hope you don't mind making the adjustment in your reader.
Posted by David Cox at 6:36 AM 2 comments:

Yesterday I had a few students absent and we did a lot of examples involving multiplying binomials, factoring and solving quadratics by completing the square. It was one of those lessons that "just happened." I had one idea I wanted to nail down and it kinda morphed into a bunch of examples. I made up most of the examples on the fly because I was just gauging their reaction and taking what they gave me. So believe me when I say, "they wasn't the pertiest lookin' notes ya ever did see."

Apparently, they were effective, though. The countenance of the class went from chin-on-hand-it's-Friday-I'm-tired-here-we-are-now-entertain-us to thank-you-sir-may-we-try-another-cuz-this-is-some-cool-stuff-and-I'm-gettin'-it.

Its tough to reproduce lessons like that so I exported the notes to .pdf and emailed them to the absent students.

I just received this email from one of the recipients:

"Thanks for the notes! They will really help. I do have one question though; did you have to take time specifically out of the lesson to take the pictures or some other program that did them for you? I’m asking this because I think that if you did this every time we learned something new and posted it on your website[s], it would be a good resource."

So I told him I slaved over my computer all of 30 seconds to export and email as an attachment. Which leads me to my question:

I have always taken a "students gotta take responsibility for their notes and review them regularly" kind of approach which has prevented my from exporting and posting the chicken-scratch covered slides from class. But if posting them is going to help them learn, should I care about the personal responsibility they take on (or don't take on) in regards to their own note taking?


Note: if you're interested in what a spur-of-the-moment-ugly-as-heck-yet-equally-effective lesson in my class looks like on static slides, hit me up in the comments and I'll update the post with a link. I'm posting this from my phone and won't have access to the notes until Monday.

Email ThisBlogThis!Share to TwitterShare to FacebookShare to Pinterest
Labels: algebra, Are You Kidding Me?, lessons, pedagogy

Gotta thank Kate for introducing me to the Row Game.  I also like the idea of using box.net as a way for teachers to upload and share them.  But, me being me, I couldn't leave well enough alone.  I like the fact that these activities are self checking and that if students find that they have different answers, then there is a mistake.  The problem with that is if I create two sets of 10 problems, I would like my students to work as many of them as possible.

So I introduced the "Easter Egg."  I have used this concept in the past when doing test review.  Basically, I hide wrong answers so students need are a little more alert when looking at the solution to a problem.

How does this work for row games?  Well, in the row game, if the partners have different answers, then someone messed up.  This opens the door for discussion.  But what if they never disagree?  Then there was no real need to discuss anything.  With the Easter Egg, I will make a couple of the problems diverge, that way agreement doesn't necessarily equal correctness.  Now they have to talk even if they get the same answer.

Today I rolled out this row game on slope with my 7th graders.  Once they got used to the concept, the did pretty well.  I look forward to doing more of these.

I don't know, maybe this defeats the purpose of the row game.  Maybe not.  What say you?
Posted by David Cox at 4:36 AM 2 comments:

11:47am: I ask @rjallain if he has an effective way to demonstrate to students how the horizontal velocity of a projectile is not affected by gravity.

Yeah, that pretty much sums it up.

Thanks, Rhett.
Posted by David Cox at 9:54 PM No comments: