So, naturally, I had to try this:

If I were using this in class, I'd probably animate it so students had to choose values for velocity, start height and distance and hit "GO."

Nevan: Dad when do you have to go back to work?

Me: I'm off for three weeks.

But she didn't stop there.  She asked herself and the class:

Why is that the formula?

She went on to describe how it's like taking a bunch of CDs and stacking them.  We know we can find the area of a CD.


That's when things got interesting.  I heard comments like these:

So we talked a little about finding the volume of a rectangular prism is just counting the number of cubic units it takes to fill the prism and how doing that with a cylinder is tough because its round.  I liked the direction they were going with this by trying to talk about something larger by defining it by its smaller parts.  So small, in fact, that the height is practically 0.
I ask, So how can you find the volume of a sheet of paper?
A student takes a sheet of paper puts a ruler up to it as if he's going to measure the height of one sheet of paper and one of his group members says:

Dude, why don't we just make a stack that's 1" tall and divide by the number of sheets it took to make it?

They all agreed that would work and I thought we were ready to move on when a boy asks, "So what's the volume for a sphere?"
They wrestle with this for a minute or two when one of them turns to me and says, "Mr. Cox, you know, huh?"
Yep.
But you're not going to tell us are  you?
Nope.
A student opens his planner to the Math Formulas page and starts to tell us what the formula is when one says,

I don't care what the formula is.  I want to know why that's the formula. 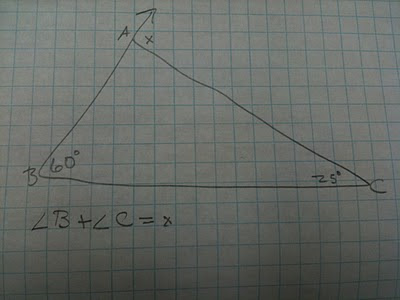 I kept reading about all the fun everyone was having with the ProjectEuler thing, so I thought I'd give it a try. I thought it was pretty easy until I got to that one problem where they ask you to add up all the multiples of 3 or 5 that are less than 1000. I hear that people are using Python and letting the computer do the number crunching.
So, I think to myself, "Self, you took Pascal about 20 years ago back when RAM was measured in single digits and you said 'bless you' if someone said, 'gigahertz.' in college and absolutely hated that freaking class came out a better person because of it. This may be something you don't have time for, I mean you have 5 kids. Wake the heck up an enriching experience. And besides...Pascal...Python, they both start with Ps yeah, that's probably the only thing they have in common. You got this, man. G'head, give it a try."
I go to the Python site and read every thing I can to figure out which version would best suit me. (There's a lot to choose from, you know.) I can't find anything anywhere. It's all so confusing. Please. Someone. Give me a nudge in the right direction. 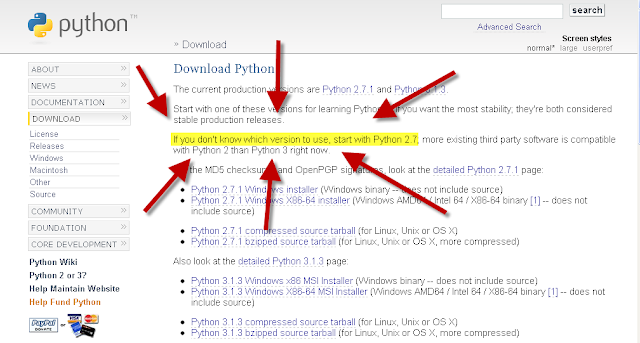 So I take a shot in the dark and go with v.2.7.
Anyway, this isn't really about Python. It's about the video I grabbed while downloading the program. I'm going to have my kids wrestle with it after break.

I may not ever find the solution to that really difficult problem about multiples of 3 and 5, but at least I got a lesson out of it.
Posted by David Cox at 9:44 AM 6 comments:

Sometimes we just stumble onto stuff. I've taught slope intercept form for a lot of years, but the more I try to stay true to the concept, the more my students demonstrate innovative ways of seeing things. We just finished up linear equations and their graphs. The equations part of things usually culminates with a student taking two points and writing the standard form of the equation by way of this process:

I've usually encouraged this process as it seemed to be the efficient way to cover the majority of these skills. But this year, I kept it much more loose. We all agreed that if the two points given define a line with an integer for the y-intercept, then it's pretty easy to write in slope intercept form. 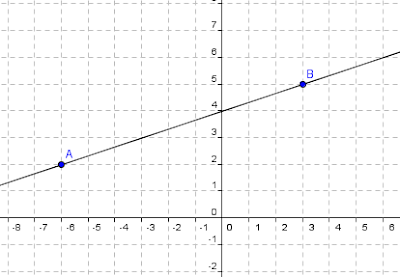 I mean, c'mon, we've got the slope and we see the y-intercept plain as day.

But what happens here? 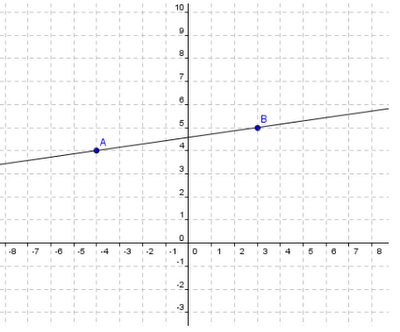 
Most of the time when we discuss Slope we talk about the path from one lattice point to another. For example, the slope between A and B is 1/7 because we go up 1 and over 7 to get from A to B. 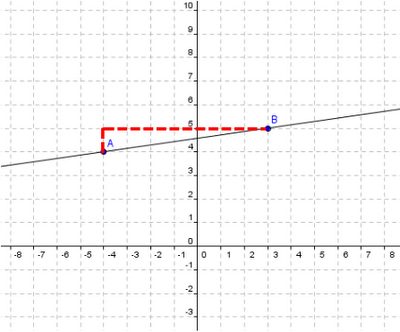 But we have been doing more with rate of change as a unit rate which means that for every 1 unit of horizontal change, we increase 1/7. Yeah, I know that sounds elementary, but it makes a difference in how your kids see these things.

If each step increases 1/7, we increase a total of 4/7 to get to the y axis. Therefore, y-intercept is 4 4/7. We still talk about point-slope form, but this beats the heck out of the plug and chug that usually goes along with it.

I'm still a believer in the taxonomy I wrote about a while back.  I can teach duplication like no body's business and finding ways to get students to apply what we are learning isn't a problem.  It's the creation part that I get hung up on.  I want my students to find ways to make their own connections with the math.

Our attempt at creation.

Assignment:  Pick something that interests you; something that you can connect to one of the concepts we've covered this semester.  Learn as much as you can about it.  Tell us what you've learned.

I only had one requirement:  Don't ask yourself, "What is Mr. Cox looking for?"

Keep in mind that I get the kids who taught Clever Hans how to read people.  They are fantastic kids, but they also have learned how to game the system.  Find a way to jump through the fewest hoops (or at least the most efficient way to jump through them all) while gathering as many points as possible on the way to be-all-end-all of educational existence:  The A.

This assignment scared the crap out of some of them.  This was the most unhelpful I've ever been.  I allowed them to work on their own or in groups (up to 3). We discussed the benefits and pitfalls to working alone vs. working with a group.

We discussed what type of media would best serve their presentation.  I learned that when I say, "presentation," kids hear "PowerPoint."  I told them that it didn't matter what they used to convey their learning, but if they were going to use visuals, they needed to work with their content, not against it.  Does that mean I talked to them about design?  I guess I've come a long way since this comment. (Full comment here.)

As we approached the due date, we started to discuss how this assignment should be graded.  Again, I took a back seat on this.  We just recently opened up the sequoiahawks.org domain for our students to gain access to Google Apps, so this was a great opportunity to have them work collaboratively on a rubric.  My 8th graders had some experience with this as we used G-Docs last year, but this was new to all of my 7th graders.  The only input I had in this process was to create the document and ask a few questions.  The rest was all them.

I found that some of the conversations that took place regarding what to include, what to exclude and what categories were the same (ie.  "Aren't self interest and effort the same thing?") were very refreshing.  These kids were really thinking about what was important.

It was nice to see students take things that we have done in class and either find a context for them or extend them beyond what we've done in class.  There were a couple of presentations that stood out for their creativity and some for their thought provoking qualities.  We had a few nice class conversations that came from questions posed in the presentations.  Both classes had someone ask the question: is .999...=1? which provided a great opportunity for discussion.  The 8th graders were pretty curious and this led to a conversation on ∑ notation, ∞ and limits.

We did have a few groups that mailed in the projects, though.  I had a tough time not airing them out publicly (in one case I did) as they showed complete disrespect for their classmates' time.  This demonstrates that the hoop jumping is not quite out of their system, although I'd say we are off to a decent start.
Posted by David Cox at 11:42 AM 4 comments:

What can you build with this?

The other night, Dawson and I were doing some math together and we ran across a problem that asked to interpret a scatterplot for the average movie ticket prices for the past 10 years. We poked around online until we found this image: