This is Gonna Hurt

These kids aren't dumb.  But they think they are.  What's dumb is the way math has been done to them.  I didn't think so before.  I do now.

I made a commitment to do a few things differently this year.

Consistent Format
I've created a lesson template in SmartNotebook that is really quite simple.  Each file contains lessons one week at a time (even though I may only lesson plan one day at a time).  Files are named Week1, Week2, etc and slides are named Day1, Day2, etc.  Each day contains a slide for the Opener, Number Talk, Lesson for the Day, Homework Assignment and Exit Slip.  Any handouts, links or any other resources I need for the week are attached to the notebook file.  I've linked the previous day's homework slide to the current day's opener slide--mostly because I have a tendency to forget to talk about homework.  Another cool feature I've started to utilize is the ability to link to these resources from within the actual Smart slides. Now, I can access the web, applet or any other resource with just a click on the slide.

This has been really good for me because it's allowed me to really focus on the content of the activity which ends up paying dividends for the students as well.  This makes the design a non issue as I'm just replacing old with new and everything has it's place.  Next year it will be nice as well because my resources will all be aggregated.

Opener
I've always been a believer in having something for students to do at the start of the period but having things structured has helped me be more focused on my daily first impression.  These problems usually contain a review problem, some sort of pattern recognition problem and a maybe random fact involving numbers that I re-word so students have to make an educated guess.

Number Talk
I read about these in What's Math Got To Do With It and it immediately clicked.  I've been wanting to help kids with their basic numeracy and tried to deal with it as it came up.  Having a daily Number Talk has embedded it into my lessons.  This has paid off greatly in the first few weeks of the semester.  Metacognition is one of the bonus words in the faculty meeting bingo game and it gets thrown around like LMNOP in a pre-school class.  We think we know what it means, but really have no idea.  Metacognition isn't something you can talk about, it's something you have to be about. (h/t @jybuell)  A Number Talk is all about Metacognition.  I'm sure there could me more done with it than what I'm doing, but so far, so good.  It's a travesty that so many kids haven't learned to decompose and recompose numbers.  It's almost like I've had to give them permission to do so.  And there's a positive correlation between kids who struggle and kids who don't know how to break numbers apart and put them back together.  These kids are what we've begun to call "Stackers."  They want to mentally stack the numbers they are adding or multiplying and work the standard algorithms mentally which is the most difficulty way to do mental math.

This activity has "win" written all over it.  Not only do kids have to think about their thinking, but they get a chance to discuss it with others in a pretty non-threatening way.  I can already see the culture of the classroom changing.  I still have kids who are resistant because they are painfully afraid to share their thinking, but more are jumping on board than not.

Context, Context, Context
I've made a conscious effort to introduce everything via some sort of problem solving context. These contexts are sometimes application problems but, more often than not, they have been in the form of some sort of problem that gives students the opportunity to identify a pattern and use multiple representations to describe the pattern.  I started this very early because I want them to realize that words, pictures, tables, equations and graphs are just different ways to tell the same story.  I'm finding that kids who have scored very low on standardized tests have been very successful in taking a pattern and generalizing as well as graphing with not much trouble at all (which just further demonstrates that it's not the kids failing math, it's the math failing the kids).  I've also found that it's much easier to differentiate when you have students engaged in an activity than it is when you're in the middle of a lecture--news flash, right?  I'll go into more detail about the actual activities I've had students do in a future post.  But, suffice it to say, I'm convinced that these kids can do math.

Things That Need Work
I've been spoiled over the past five years.  The kids I've had come through my class have been extremely mature and hard working.  I would still have kids who would lose focus and say and do things they shouldn't, but the overall direction of the class has always been pretty easy to maintain.  But again, that mostly has to do with the fact that the advanced kids usually have parents up in their grill about anything less than an A.

First quarter just ended and, while we are still having our ups and downs, I can see some adjustments I need to make.

I have to be more mindful of the timing of things.  I'm still having trouble determining how long an activity should take.  As a result, I'm either running out of time or expecting things to go longer than they actually do. It's a different type of planning for sure.

I can't expect all these kids to be mathematicians. Yet. Yesterday, I had one of my advanced kids discover the point-slope form of a linear equation.  All I did was give the class a point and a slope and asked them to figure out a way to show me the equation.  It was beautiful.  And messy.  And it was all his.  In fact, instead of using (x1,y1), we used (c, a) for the given point for no other reason than those were the kid's initials.  I can't just drop a problem on my other two classes and get out of the way.  I can however, offer opportunities for them to engage in math in real ways.

It's not their fault. I'm all about kids taking responsibility, but I have to remember that they have been forced been trained learned to wait for directions.  I have to help them unlearn this learned helplessness.  But I also have to be gentle when pointing it out.  I'm not very subtle at times and I think that's done more to hurt the progress of some kids than help.

I have to find a balance between context and abstraction. Even my struggling kids can take a context and have a decent discussion on how the graph helps tell the story.  But if I give them the exact same equation to graph without any context, I get a bunch of I've-never-seen-this-before looks. This isn't a matter of not being able to do it; it's just a matter of recognizing it when there isn't a context.


I'm probably not going to fix all these things before the year's out, but that's ok...there's always tomorrow. 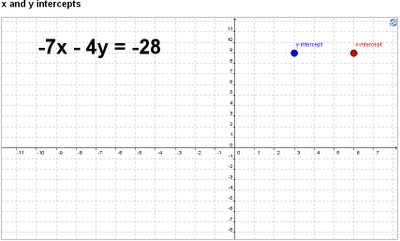 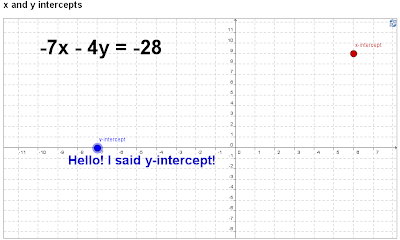 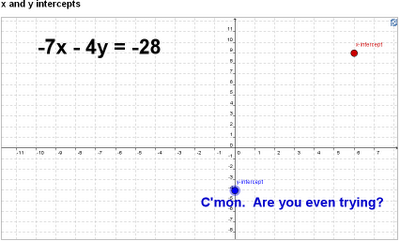 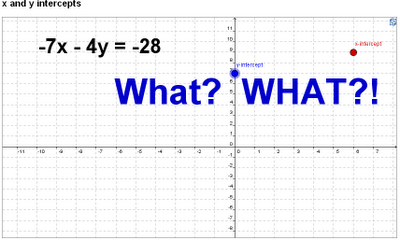 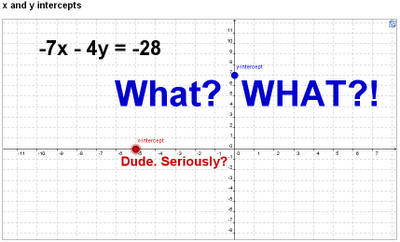 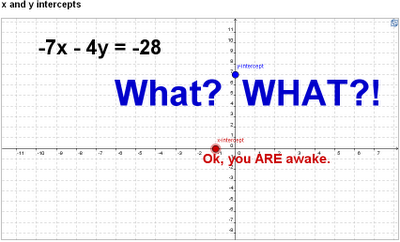 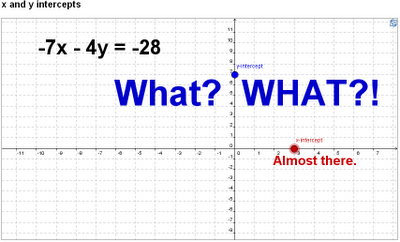 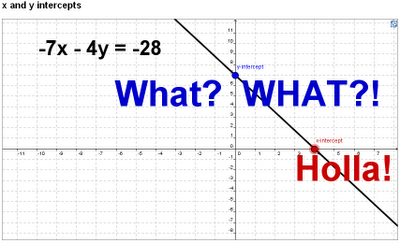 Hit the refresh icon and Repeat