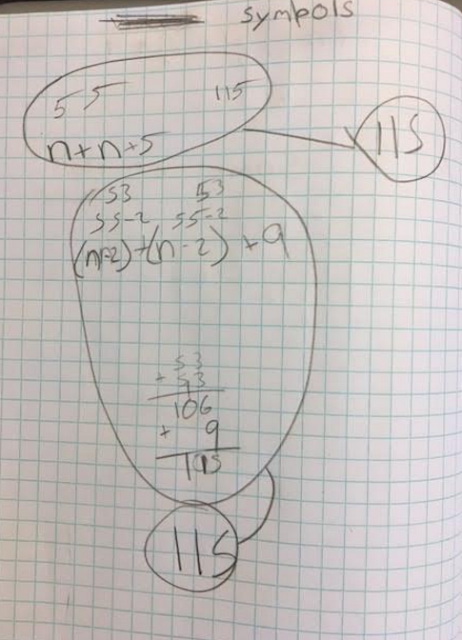 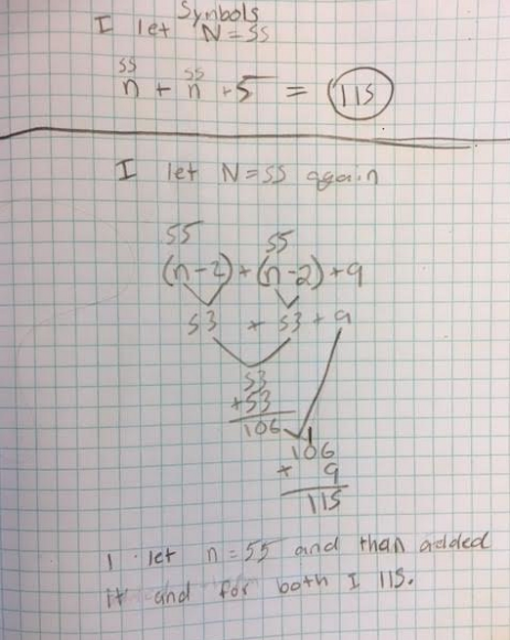 One of the things I really appreciate about the CCSS New California State Standards is that we want students to make connections across domains and grade levels. And, while some may disagree with me here, I appreciate the transferrablilty of the standards for mathematical practice. Things like attending to precision, constructing viable arguments, critiquing the reasoning of others, looking for and using structure, and problem solving in general all play in other content areas life.

Any chance I get to make a connection to another area, I do it.  I read an article a while ago by Hung Hsi Wu where he treated a variable as a pronoun.  It made sense to me.  It makes sense to my students, so we go with it.

We are about to dig into equations and expressions, but I really can't stand how textbooks approach this.  You get to see maybe one or two simple expressions that may be tied to a context, but then a million exercises with expressions so complicated, there's no way a kid can tie it to anything that matters.

So here's where pattern problems come in.  Fawn has done a tremendous service for us.  I'm also really digging Dudamath lately because I can be more intentional with the patterns I put in front of my students. Seriously, if you haven't played around with this site, go there now.  It's pretty amazing.

We've done a few pattern problems and we are getting the hang of doing the generalization, but writing an expression has been more difficult.  So, here's where Wu helped.

Our morning announcements just mentioned our volleyball team won yesterday, so that provided a nice context.

I wrote these sentences on the board and asked if they could write one sentence that captured the essence of all the others.

"Maria and her friends played volleyball."

Right next to the sentences, I wrote the following expressions:

and it didn't take long for us to settle on some version of 3 + n.

The groups then went to work on today's pattern problem.  The use of some sort of variable when trying to describe a rule made it's way into their work.  Many of the groups are still in progress, but movement was made today.  Let's see how it goes tomorrow.

The struggle here is real.

These two samples are from the same student. Makes me think about what we prioritize, and about who else is hiding. pic.twitter.com/ePCfiEVVWK
— Kent Haines (@KentHaines) September 13, 2016

A student has no idea where to place a fraction on a number line (because fractions aren't numbers, of course) but can convert to a mixed number like a champ.

My attempt to help out:


This applet gets at the heart of the things I've enjoyed working on lately.  The initial estimate offers very little help, but as the student progresses through, they have more references which allow the revisions to become more precise.  When my students worked with this applet, there were audible groans when I asked them to lower the lids on their computers as well as exclamations of "I got it!" when they moved closer to 0% error.

Here's a GeoGebra book that goes from estimating fraction to addition to multiplication.  I'm still working on division, but that should drop soon.