You are really starting to make me angry.  I was content to just do my job, help as many kids as I could, do some extra stuff to help them make it connect to their reality.  And then at 4:00pm shut it down, go home, kiss my wife, play with the kids, have a nice dinner, watch a little TV and go to bed.  But no!  You just had to start in with all this "using pictures to help kids learn math" stuff.  You couldn't leave well enough alone.  When I couldn't get Graphing Stories to work, you couldn't just say "sorry dude, I am not sure why those chapters won't play.  Better luck next time"... no you had to send me a copy and not even take the reimbursement I offered.  Who do you think you are?

Man I can't even go to Target with my family without trying to take a picture of something.  You know how disruptive that is?  You know how hard it is to hold the baby, push the cart and snap a pic at the same time?  I am looking into having an extra arm grafted onto my torso.  You think my insurance will cover that?  Nooooo! And it is all because of YOU!

The worst part is that I have these video cameras lying around my classroom and a blue screen in the library so I had to skip lunch the other day and take some footage that has resulted in some stills like these: 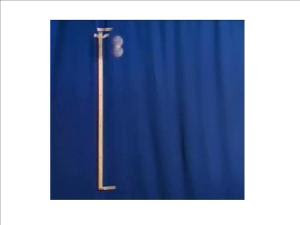 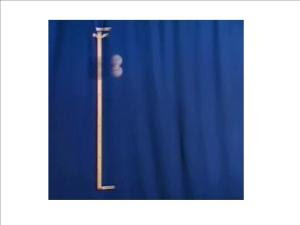 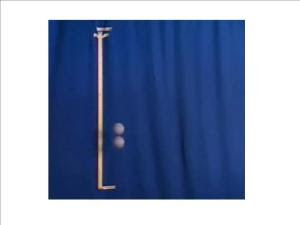 I mean, look at that.  How can they not see that the ball is accelerating as it falls?  I don't want that.  I want them to depend on me to tell them that gravity is an acceleration. 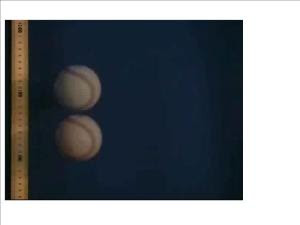 What's even worse, is I have all this raw video footage and I have no friggin' idea what to do with it. What am I supposed to do, have students graph the height of the ball vs. time and realize that there are some relationships that aren't linear?

My students are even getting into the taping.  They look so cute  and happy throwing the ball back and forth, but little do they know that one day this concept of math actually helping them  to interpret the world around them can consume them.  What's next?  Are we going to start treating mathematics like a humanity and sit around discussing it as if it were a piece of literature or work or art?  Don't you know that math is only supposed to be important  8:20-2:55 in Room 405 from September to June?  Don't you know that math is supposed to be a set of rules that we force our kids to memorize until April 22 and then they aren't supposed to think about it again?  Get with the program, will ya?

And no textbook?  C'mon, man!  What are you thinking?  Those things were all written by people who really care about making math matter to our children. Don't you know that the more a student sits in front of a textbook, the more they learn?  I saw some research done by an independent agency Houghton, McGraw, Holt and Littell that says students can actually teach themselves with these things.

In closing, you have got it all wrong.  Kids want to have subjects forced upon them.  They want to be told the rules, they want to mindlessly copy exactly what the teacher says and does and they especially want to ask questions like, "I don't get it."

p.s. Can I make a cameo in Graphing Stories vol. 2?

p.p.s Can you all help me package this up into a series of lessons?
Posted by David Cox at 7:32 AM

Email ThisBlogThis!Share to TwitterShare to FacebookShare to Pinterest
Labels: Are You Kidding Me?, curriculum, lessons

It's a sickness, right? Can't shut it off. Apologies.

Wait until the math teachers around you realize you're infected - and that you're trying to give it to them too.

@Dan
You got it! I thought the incubation period would be a little longer.

@Jackie
They are starting to catch on. We have a small dept. so this may spread pretty quickly.

Can it be a school-wide pandemic? That's what I keep hoping for...

I don't see why not. But there are just some teachers who don't want to get sick.