Almost Blew This One

Today, my 7th graders were dealing with a problem that eventually they will solve by setting up a system of equations.   Right now, they don't have that in the tool kit, so guess-and-check would  be the strategy of choice.  Here is the problem and our first step: 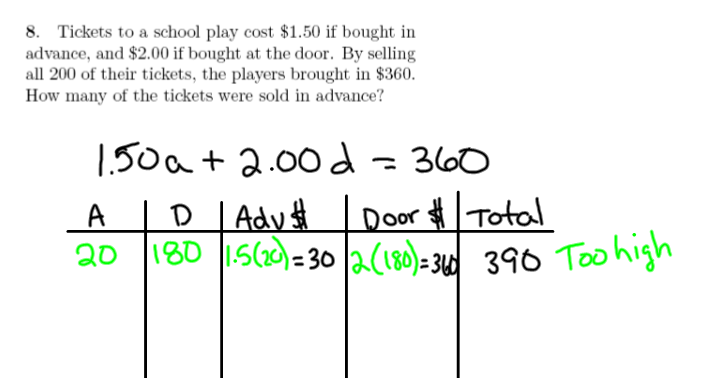 One student was able to come up with the equation: 1.50 a + 2.00 d = 360, but another was quick to point out that there would be many different solutions, so we couldn't use it...yet.  So the first guess is 20 and we recognize that the total is too high.  Usually that indicates that the first guess is too high, so we normally go with a lower second guess.  However, this time, Aaron pointed out that it didn't make sense to decrease the guess on advanced tickets because they are cheaper.  In fact we want to increase that one.  This is right about the time I almost lost my poker face:

Aaron: "So if we add to the advanced tickets our total will actually go down."

At this point, I almost blew it.  Nearly jumped right in and said something stupid like, "That's right Aaron.  You guys get it?"   To which they would have all nodded "uh-huh" and we would have moved on.  But I caught myself, gave him the "eh, I am not sure about that" and removed myself from the conversation.  So Aaron had to try to re-explain to his classmates what he was saying.  I could tell that a couple of them got it, but many were still perplexed.  After a couple of minutes I asked Jose if he could explain what Aaron was saying.  Jose nailed it and a bunch of  kids have an "a-ha" moment.  Good stuff.

Later I asked Jose why he didn't speak up a little sooner.  He said that he didn't figure that he needed to ask any questions because he understood it.  I asked for a show of hands on how many understood after Jose's explanation and that's when about 15 hands shoot up.

We have been talking a lot in my classes about how important it is to join the conversation.  Some kids still think that it's just about them.  They don't realize that if they offer something to the conversation, not only do they benefit from explaining something they already understand, but there is no telling how many other kids benefit too.

I just saw that problem solving method at a conference in a session on CPM. Is that the program that you're using? Any comments on it? (I'm kind of flirting with the idea of supplementing with some CPM at the moment)

Hi Meg,
I am not currently using CPM, but I did use it exclusively for my first 10 years in the classroom. (The problems I am having my students do are from Philips Exeter Academy) And yeah, guess-and-check is the base for most things CPM -- especially when it comes to problem solving. I really like how g&c allows kids to meet the problem where they are and then at the end, if they want to allow the guess to be "x", they will usually be able to derive an equation that can easily be solved.

Comments on CPM: I like it way more now than I did when I was actually teaching it. CPM encourages thinking, reading and writing--all of which are absent in many math classrooms. I would have no problem using it as a supplement.

Just wanted to say I loved this story; I love that Jose got to see the impact of his explanation.

Hi Ben
As the conversation was unfolding, I kept thinking Aaron was the story. Once Jose chimed in, he became the subject. Crazy how that works sometimes.

I know what mean about almost "blowing it." Today in my first Geometry class, I did. I jumped in way too soon on a series of problems and, while it kept us moving along, I walked away wondering how many actually got it.

In the second class I let the conversation evolve, only asking a couple questions when they stopped short and felt they were done. Mainly I gave them a new example (which would contradict the model they had created) and asked them to verify that what they had done worked. It didn't and launched a new and even more fruitful conversation that I did end up stepping in and stopping once they nailed the first problem and starting jumping into the next set of conclusions, which the following problems were going to address anyway.

It is hard sometimes to create the learning situation and then step back.

Jim
Between my CPM training and the AVID workshops I took on Socratic Seminar, I really look for opportunity to step back and let the students run the discussion. However, even though I am looking for the opportunity, I find myself offering feedback too early as well.

Isn't amazing how when we offer less to the discussion, more learning takes place?