I thought about giving this to my 7th graders...

...for about two seconds.

But instead, I gave this: 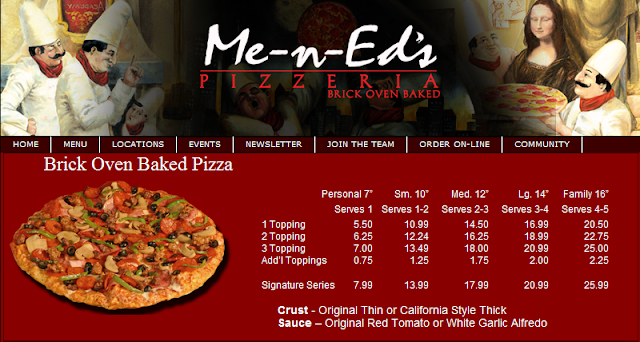 1.  Decided that the best question was:  Which pizza is a better deal?

2.  Misconception:  Comparing diameters to determine which pizza is preferable.  This leads to believing that two personal pizzas are a better deal than one large. (Note to self:  Let them think this as long as you can.  It's kinda fun and the truth hits them harder if they're committed to their initial opinion. )

3. Realized that area is the way we measure which one gives us the most pizza.

4. Determine area of each pizza and calculate $/sq".

6.  Extension: What are we really paying for?   Not the crust.  Assuming that the average pizza contains about 1" of crust on the circumference, removing it takes the personal pizza from $.14/sq." to $.28/sq".

7. Synthesis:  We brought out the laptops and put our data into Excel.  I allowed them to enter the diameter and cost for each pizza then showed them how to use the function and fill features to have the program do the number crunching for them.  I'm actually disappointed with myself for not doing this earlier in the year.  I often forget how powerful Excel is for teaching math.

8. Conclusion: If you order a personal pizza, eat your crust! 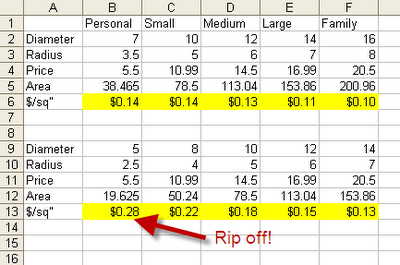 9. Reflection  I wasn't prepared to handle the question on rates.  I think in terms of $/sq" and assumed that my students would too.  I also took an opportunity for student ownership away by drawing the two 7" pizzas inside of the 14" instead of allowing the student who came up with the idea a chance to shine.

I'm taking this one on the road and will swap classes with other teachers in my department to see how their kids handle it.

Kind of obvious, since the data is right there, but you could extend it the next day by analyzing the effect on $/sq inch once toppings are added.

Great activity, though. I'll probably give it a spin in my class tomorrow :)

Must: bring pizza the next day.

I'll be "borrowing" this idea. For sure.

I've done this from the textbook, and told too much. I've bookmarked to remind myself.

Ian
Yeah, this lesson definitely lends itself to analyzing data. I found that with each class, we focused on a different driving question. They were similar, but each class definitely had it's own focus.

Matt
Oh, was I supposed to bring the pizza? After teaching the lesson on Thursday, I took my family out. Does that count?

Sue
Glad it helped. I really enjoyed this lesson.

I'll be borrowing this lesson - timed perfectly, in fact, for Friday. I'd have to find a local version as we use cms rather than inches down under in Australia.

I did something similar for Decimals a while ago. In that problem-solving group activity, I incorporated non-mathematical questions - e.g. eating out vs eating in. In real life, we make choices not often logical from a financial perspective.

For your lesson, I'll make similar adaptations, e.g. why would you choose personal vs large? The process of justification is an important life lesson as well as good mathematical thinking, ie reasoning, in an abstracted way.

This is fantastic! Thanks for the idea, I too will be "borrowing" this idea for class in a couple days. (And I'm gonna suggest to my class that since I brought them the lesson- they should bring me the pizza):)