What We Have Here...

Last month I sent out this tweet as a result of a conversation I was having with my principal. He was telling me about a workshop he had attended about leadership and the facilitator said that the way one leads must depend on the generation of those being led.
For example, if a baby boomer is called into the office, he assumes that it must be bad news since he's been pretty much left alone his whole life unless he's screwed up. Whereas a worker from Generation Y would think that the same call to te office would signify some sort of attaboy since he's been raised by helicopter parents who made sure juice boxes, snacks and trophies came after every game win or lose "just for being you." (I guess the Gen Xers never got out of bed to get the note.)

I called BS and sent out the tweet knowing full well that I was sending it out to a skewed sample on account of, as Dan so aptly put it, y'all are freaks.

Your responses were overwhelmingly negative mixed in with a couple of "they probably want me to take on some new reaponsibility" and Matt's "I'm getting a promotion" (which he already got, so that's kinda like cheating). I was surprised to know that you are all so scared of your admin until I remembered a few years back when I got an email from my principal asking I "come see her at brunch", how I freaked out and responded with, "is there anything I can do to prepare?" only to find out that I was being surprised with the Wal*Mart Teacher of the Year award (still have the vest to prove it). 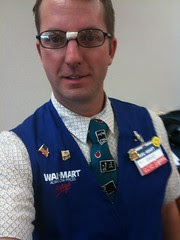 This makes me wonder:

Why do we assume the negative? And more importantly, why do our students? Again I'll say, they see us the same way we see our administrators. It's no wonder they don't want to ask questions in class.

Getting selected as a Wal*mart Teacher of the Year would be frightening for some of us.

I don't think I buy the generational explanation either.

I think just the being summoned has kind of an ominous cast to it. If it's routine-good, they would just say attagirl when they happened to see you or wait until your periodic evaluation, and if it's unusual-good, I don't know, it seems like you'd get a letter or get surprised at a faculty meeting or something.

I think that the negative assumption comes from the precedent set culturally. In conversations, stories, shows, movies, songs, being called in for a conversation isn't for doing well. Which also makes sense because the drama of negative consequences makes for good stories. Even a wonderfully supportive principal is working against that repetitive message that being called into the boss's office means you're in trouble.
I know there is a similar effect when news stories turn towards how our education system is "broken." No matter how well I am actually teaching, the doubt creeps in and I definitely notice my confidence take a nosedive.

Also depends on your relationship with the "boss."

YOU LIAR! you never worked at wal*mart. tsk tsk.
I think you are absolutely correct about how come some kids don't have questions. Always thinking about the negative is never a good thing.

My reaction would totally depend on which boss called me. I have several and my relationship with each is slightly different, affecting my reaction.
The generational thing seems bogus...but since I'm Gen X, I guess I can't comment. =)

Is there reason to assume that the reason for the summons is positive or negative? Could it be completely neutral and just that the boss wants to chat?

A colleague of mine told me that "you should catch them being good" which is something that struck me at the time as being a bit out there, but the more I thought about it, the more sense it made.
That same colleague also calls up her students parents occasionally telling them how good their son/daughter has been in class. You can pick that student a mile away after that.

When my "boss" (department chair) wants to talk to me, he asks if he can drop in at my office. He usually says why also. Sometimes he just stops by and asks if I have a moment.
The conversation can be about a task he wants me to do, advice he wants on a decision, problems we're having with a student, department politics, curriculum design, or even research.

Of course, that is one major difference between being a professor and being a K-12 teacher: we don't see our administrators as bosses, and they don't often try to behave like bosses.