At least in my own head. No, I can't shut it off! Not sure I would want to even if I could.

I am getting gas the other day and this shot is screaming at me: 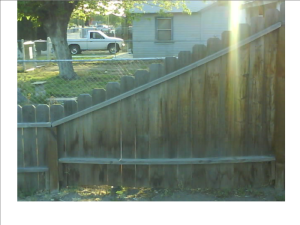 So today, I put the slide up and the kids immediately start talking about slope.  I like that they thought slope, but slope isn't really going to do much when it comes to fences. So I asked them:

"What would you want to know if you had to build the fence?"

They caught on pretty quickly that one would want to know the length of each board.

"Alright, then tell me the length of each board."

"But, Mr. Cox, we don't have enough information."

"What do you want to know?"

"We need to know how long the shortest board is." 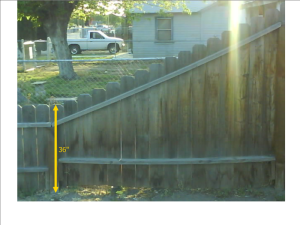 "Alright, now tell me how long each board is."

"We can't. We need more information."

So I had them discuss with their groups what information they had to have in order to figure out how long each board was.  Once they had an exhaustive list, they were to write it on their group's easel.  We quickly came up with the following:

So do we need the next board, or will any board do?  We eventually settled on any other board.

It didn't take long before students had listed all the board lengths.  Many used the rate of change and then added the increase to each board to find the length of the next.  But it did't take much prodding for them to realize that having an equation would be nice.  We came up with y = 2.5x + 36 fairly quickly.  The interesting discussion came about when I asked what x represented.

"X is the number of boards."

Which board do you think they pointed to? (You guessed it, the one labeled 36". )

You would have thought that I asked them to stand in the corner of a round room. But once the "but this equation haa-aas to work" wore off.  They realized that it wasn't the equation's fault.  It was how they defined x.  Board 0 is important because we aren't actually counting boards, we are counting the number of increases.

Reflection: I think that the lesson went really well, but it was very telling how many students wanted to impress with their knowledge of the vocabulary as opposed to just looking at the problem and asking the obvious questions.  They were trying to be mathematicians rather than someone who just needs to build a fence.  Next year I want to do a better job of introducing concepts a bit more organically as opposed to "here are the rules, here are some examples, let's get to it." Students are much more engaged when the information is given a little at a time.  It keeps them from answer chasing and allows them to think a little.  It may take a bit longer to deliver the lesson, but the benefit of having kids think about the math is priceless.

Questions: What else could I have done with this image?

Good work. When I first saw this picture, I was afraid it was going to be forced (I saw "slope" as I skimmed and thought you had forced the issue). Upon reading, I think you really weren't very helpful... bravo. So, apart from WCYDWT, you asked "how would I build this fence" and the kids did the rest of the work.

I guess the goal now is to make it into a lesson. You've got the workings of fulfilling standards on slope, two-point form of a line, or even linear regression. So, the question would be, what would best extend to one of those areas, without being forced, contrived, or even just uninteresting?

Oddly enough, the fence looks like it could be parallel to the roof in the background... how tall is that house?

I didn't notice the roofline, but it wouldn't be difficult to find out how tall it is. I drive by it every day. What would you do with that though?

What if instead of telling them everything, you asked them to find all possible measurements with the catch that you will only give them a single measurement. For example, if you provide the length of an object in the picture, they should be able to use proportions, calculate angles, and find the length of pretty much everything else. In a geometry class, they should be able to use trig ratios to find the length of the succeeding boards using proportional measurements. It might be more engaging if they calculated a bunch of measurements, and you ended class with a slide of all the measurements you took at the site, and a comparison of the calculated values and the real values. Just a thought.